July 28, 2013
A couple of weeks ago, I took my friend, Matt, out for dinner for his birthday.  Matt and I used to date for a couple of years.  I broke it off nearly two years ago when I just got tired of the "dead end" that was us.

We spent 3 years together and nothing ever resulted out of this "non-relationship."
"Going out" with him meant going to the local diner in his neighborhood or going to the movies.  By the time we actually did something more, like take a short and disastrous trip together, whatever affection or lust I felt for this man was gone. 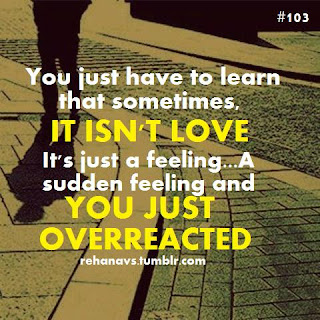 To be fair, there is a significant age difference between us so I'm sure that's part of it.  But at the end of the day, we just weren't compatible.  What I wanted he refused to offer me, and what he wanted was quite unreasonable and I refused to offer him.

Matt and I had developed a friendship over the past couple of months. We greet with a quick hug and peck on the cheek and keep it moving, usually taking a walk somewhere in his neighborhood, having dinner and then parting ways.  I much prefer it this way... I'm not sure why I ever tried to make anything more out of it.


This particular evening, we went into the city, had a great conversation in which we were catching up on our dating/social/working lives, eating yummy food and having a drink.

Somewhere in conversation, he brings up this whole theory he has on love, lust and logic.
He says that in order for a relationship to work all three of those must be in order.

Logic, which entails thinking about how your partner serves you a purpose and where you start to reason with yourself as to why a relationship with that person would work, should be first.

And finally, love, which is really developed over time should be last as it clouds all judgment when it's first. 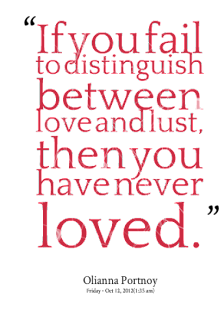 He stated that usually people allow Lust and/or Love to rule the situation and that usually results in disaster.
He then proceeded to tell me that I'm a very "logical" person which doesn't work for the benefit of the men I date or just generally communicate with and that is why I'm single.  He told me it's one of my best qualities rather than a flaw...

However, as dinner came to an end and we took the subway together.. we started talking about his living situation.  His daughter currently lives with him now as she's home from college but she's never home on weekends... and then all of a sudden he says, "Oh wait... you haven't seen the apartment for over a year, right?"

I already knew what was coming.
I answered him that no,  hadn't seen his apartment since he'd made changes.
He then says, "Well, I hope you know you are still more than welcome there, I just never ask you to come upstairs because I think your answer would be no, right?"

Now why in the world would I want to go upstairs?  After politely making up an excuse as to why I don't really have time to go upstairs and see the changes he's made... he makes up reasons as to why I should go up.  Then finally admits that he wants me to sleep over.

Matt: "At least you know with me it's just a lust thing and that I won't make you empty promises or call you 'chula,' muneca, sweetie, etc... You know that I'll never love you and at least we can enjoy each other's company..."


As appealing as that seemed to him, I told him that's not what I wanted, that's not what I'm looking for and I'm just not interested.  If I wanted to be someone's long term booty call YET AGAIN, we would've never ended.  Three years of my life waiting for this man to make some sort of move in the direction of wanting to settle down with me was quite enough for me to get the picture.  We don't want the same things and trust me, that includes everything.

After I turned him down as nicely as I possibly could... he got kind of snippy.  He went on a rant and told me that that's the reason men lie to me and try to sugar me up.  Because they just want one thing and I'm not willing to give it to them without love.

I was really quite thrown off by this.
I explained to him that he was very wrong about that, as I am nearly 32 and I could easily have sex without love.  BUT why in the world would I go backwards and repeat the same mistakes with the same exact person after I wasted three years of my life trying to get him to settle down and here it is, he's basically telling me that there is no way in hell he's ever going to love me or settle down with me.
Not to mention the fact that while I care about him, I'm not IN love with him, and I certainly do NOT have feelings of lust for him.
Isn't that one of the three components that he'd discussed earlier??
Shouldn't I be physically attracted to someone in order to even want to sleep with them????

He then told me that the only reason he hangs out with me is because I have a nice ass.

Okay, please explain to me where the logic in this is.
I haven't engaged in any sexual activity with this man in nearly 2 years.... and yet, the only reason he goes out to dinner with me is because I have a nice ass?  In hopes that I will show him the nude version? Really?

I was taken aback.
How can someone be in such denial?

Am I really that ignorant or is he really trying that hard to convince himself that he was never in love with me?

What exactly sounds "logical" about that scenario?

If we haven't slept together in TWO years... haven't kissed... touched each other inappropriately, etc etc...
If we strictly go out to dinner in public and I'm always home by 8, 9pm....
If I haven't even been to the inside of your building in just as long...

Why in the world are you still hanging out with me if all you wanted was one thing?
If LUST was your reason... and you claim to have LOGIC and no LOVE, don't you think that you would've given up after all this time?
Who is really fooling themselves in this situation? 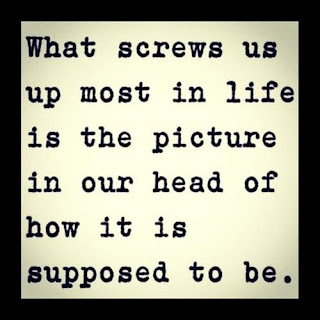 Needless to say, I've made a conscious decision that this friendship is now being downsized to an acquaintanceship... as I don't ever want to find myself in such an awkward position again.

So much for the love versus lust debate.

“True love never dies for it is lust that fades away. Love bonds for a lifetime but lust just pushes away.”   ~Alice Barnhart