March 18, 2017
As it goes, in my short life, I've noticed that the most popular defense mechanism people use is projection.  Projection is the misattribution of an individual's ugly thoughts, feelings or impulses upon another individual who is not experiencing these same thoughts, feelings or impulses (McLeon, 2009).  It is used when the thoughts may seem unacceptable for the person to express.  That individual may simply feel uncomfortable having these thoughts or feelings.  What happens is the individual lacks insight into their own motivations and feelings (McLeod, 2009). 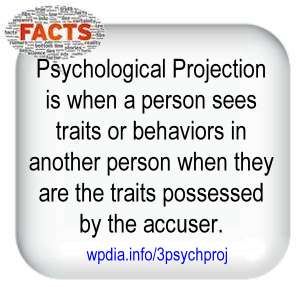 Have you ever been in an argument with an unreasonable and incredibly stupid person who keeps calling you the very things you know they are but won't admit to being?  That is projection.
I recall a time some years ago, in which an individual couldn't trust me because I'd found out their ugly little secret (not only ugly but continues to this day).  I recall laughing in their face because everything they'd said was everything they were.  An individual with no conscience, going around hurting all of the people who have tried to help them and never able to take responsibility for it, but instead taking those same feelings and saying the other person is feeling them - that's projection.

Think about that ex-boyfriend or ex-girlfriend you had, that was always accusing you of cheating, when you finally found out it was them who was cheating.
Or how about that loner who was always ranting about how people always left them but in fact, what was happening was he/she was pushing those people away with their actions.
And then there's the emotionally abusive person who calls you emotionally abusive after they've played "yo-yo" with your feelings by pulling you in and then letting you go, repeatedly. 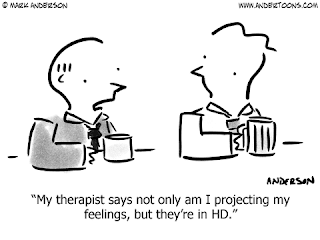 That is all projection.
The best way to combat projection is to really listen to what the other individual is saying about you and if you're absolutely positive that what they are saying is actually about them, point it out.  They hate that.  They might stop talking to you entirely, but that's probably the best thing that's ever happened to you.