Showing posts from 2019
Show all

Gaslighters And the Scars They Leave Behind

October 22, 2019
I've steered clear of writing anything for awhile because most of what I have to write is either, way too negative and blaming or just a repeat of past posts. The theme of the last couple of months, however, has been gaslighting. For those of you who don't know what the means: Gaslighting is a form of manipulation that can make a person question their own sanity. Sound familiar? Our current President is a prime example of someone who gaslights. He's said things in the past, and if we hadn't an actual written record of the nonsense that's spewed out of mouth and fingertips, many of us would be questioning if he'd really said the things he's said. In fact, there are a slew of President Cheese Doodle's followers out there that have actually seen the proof and still deny he's made the comments or said the things he's said.  There are women that don't believe his comment about grabbing women by the p*ssy is offensive. Those follower
Post a Comment
Read more

July 19, 2019
I have been absent because I've had so much going on in my life - 90% AMAZING with a splash of 10% challenging - that while I've had TONS to write about, I couldn't just focus on one thing. That doesn't mean that I don't get annoyed once in a blue and the following is a rant about that... Over the past week, I've had one common theme in my head and I feel like addressing it today. When my mom died... dropped dead unexpectedly... croaked in her very own backyard that she was sooo desperately trying to sell that it ultimately did her in... so very tragically... my older sister and I not only took on a bulk of responsibilities we didn't expect, but we also encountered some truly eye opening moments. Since that terrible and consistently hurtful event took place, she has pretty much stopped dealing with everyone around her - both familial and community.  Meaning, right now.. me, my brother and my grandmother are the only relatives she talks to and out of al
Post a Comment
Read more 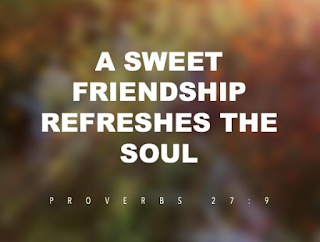 Over my time transitioning from child to teen to young adult to mature adult, I've had a lot of experience in maintaining relationships and what it means to be a friend. I can count the number of true friends on one hand and I can tell you that friendships totally outweigh romantic relationships by a landslide.  Friendships are what you rely on when those romantic relationships are no longer present AND when they're actually THRIVING. Because who can you lean on or take self care trips with, if not with your friends. Who can you celebrate your new relationship with if not your friends? I've never been bothered by the small circle of friends I have or how easily interchangeable some of them have been.  I have one true friendship I've maintained for 23 years now and honestly, if that's the last friend I have, I'm good. She is one I've had through my highest of highs and lowest of lows.  She is supportive no matter how far fetched my ideas or situat
Post a Comment
Read more
More posts